A relaxing stay in Positano, the most glamorous of the Amalfi Coast resorts

Welcome to Positano! Enchanting destination of the international Jet Set, a place renowned for the delicious traditional cuisine, for its beaches, the Vip Watching, shopping, and local crafts, walks that give every corner charming views unique in the world.
For your holiday in Positano, choose to stay at Imperati Suites, an elegant 18th century residence, equipped with all the comforts, services and a splendid sea view.

Imperati Suites is located near the famous “Scalinatella” which will take you to Positano’s Marina Grande Beach and the marina in just a few minutes.

You will discover the beauty of Positano by crossing its narrow alleys with its characteristic houses, lively shops, cafes, art galleries, the enveloping colors of bougainvillea, flowers, lemons, and citrus fruits and the intense scent of orange blossoms.

At the Marina Grande beach, you will find numerous bathing establishments and excellent restaurants with fresh fish and typical cuisine.

The beach of Marina Grande, in addition to beach tourism, has been the reference point for the nightlife for decades. Dj and internationally renowned artists are guests of the famous “Music on the Rocks” disco carved into the rock overlooking the sea.

From the Marina Grande, continuing along a romantic path that starts from the marina, next to the ancient Torre di Trasita, you reach the beautiful equipped beach of Fornillo which takes its name from the 16th century tower of the same name.

The beach is called the “three hundred steps” for the little staircase that gives access to it.

This stretch of enchanting coast has seen over time the construction of luxury villas, which belonged to well-known personalities of the international jet set.

Thanks to the position of Arienzo beach, the sun shines for most of the day. The beach has equipped with bathing establishments.

Laurito takes its name from the numerous laurel plants that grow abundantly in this part of the coast.

The beach is surrounded by the typical Mediterranean vegetation that characterizes the small natural bays of the Amalfi Coast and can be reached by a staircase that descends from the Hotel San Pietro. Part of the beach is private and there are two trattorias that prepare inviting fresh fish dishes.

In the basement of the Church of SS. Maria Assunta, the archaeologists unearthed a sector of an ancient Roman residential villa, covered by the intense rains following the eruption of Vesuvius in 79 D.C. that fell into the valley floor with the pyroclastic material deposited in the Lattari Mountains.

The restoration work made visible the triclinium with its mosaic flooring and the magnificent wall that preserves paintings of the IV Pompeian style.

At the hypogeum of the church are also visible the upper crypt with the Stone seats in the “Putridarium” and the cases containing the archaeological finds recovered during the excavation.

Below the presbytery of the upper church, there is the Medieval Crypt. The transformations had over the centuries do not make its function clear.

The Church was founded in the second half of the 10th century and an important Byzantine icon of the Madonna is kept above the main altar.

A legend tells that the ship that transported it ran aground in the bay of Positano and the attempts to resume the way of the sea were in vain. Meanwhile, the sailors heard a voice from the icon that said “pose, pose, pose” and in the end, the captain decided to hand it over to the locals. It was placed in a church of the village but the following day it was miraculously found where the ship had run aground.

The inhabitants understood it was a message and they built there the Church dedicated to the S.S. Maria Assunta.

The archipelago of Li Galli

At the marina, you will find the embarkations for Capri, for boat trips along with the coast and towards the archipelago of Li Galli: the islands from which the Sirens tried in vain the brave Ulysses with their enchanting songs.

On the island of Gallo Lungo, the largest of the three, which recalls the sinuous shape of a dolphin, there are the remains of a Roman villa, the villa built by Le Corbusier which belonged to the Russian dancer Nureyev, and a natural pool. However, the island is private.

With a bit of luck during boat trips, you may see a group of dolphins off the coast of Positano.

The Path of the Gods

The Path of the Gods is a wonderful path of about 8 km, of about 4 hours, which goes along the upper part of the Amalfi Coast.

The path connects the village of Nocelle, in the upper part of Positano, to the town of Agerola, a town on the Lattari Mountains, and retraces the ancient route linking the coastal villages.

From the hamlet of Nocelle you could reach Positano along a steep staircase, with 1500 steps, or by bus.

After Nocelle the path crosses a suggestive canyon near the Vallone di Porto.

Along the route, the view extends over the immensity of the sea, over the Faraglioni of the island of Capri, Punta Campanella and the island of Li Galli.

Once past Colle Serra, the path becomes more tortuous and it ends at the Grotta del Biscotto, so named for its morphological conformation which remembers the typical Agerola bread.

From Agerola you can reach Positano with the Sita buses, via Amalfi, or book in advance a transfer service that will be there waiting for you.

Its features are rich in lively shops where you can buy linen dresses in the bright colors of beachwear famous all over the world, swimsuits embellished with turquoise or coral, low sandals crafted in leather embellished with sparkling stones, beautiful hand-painted ceramics, typical local products, original paintings, traditional gastronomic delicacies. 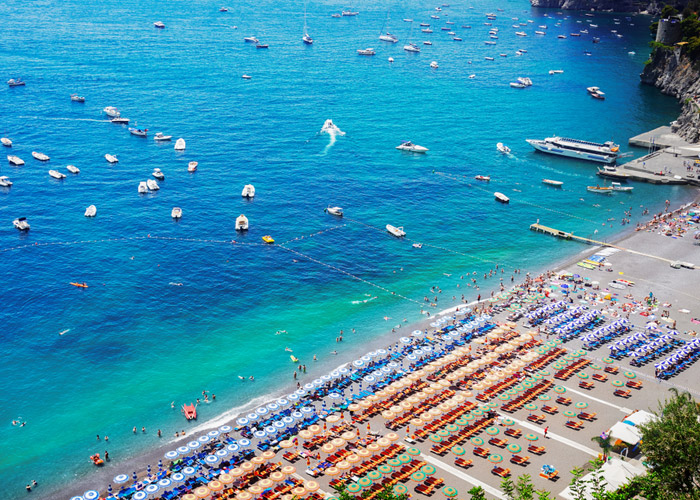 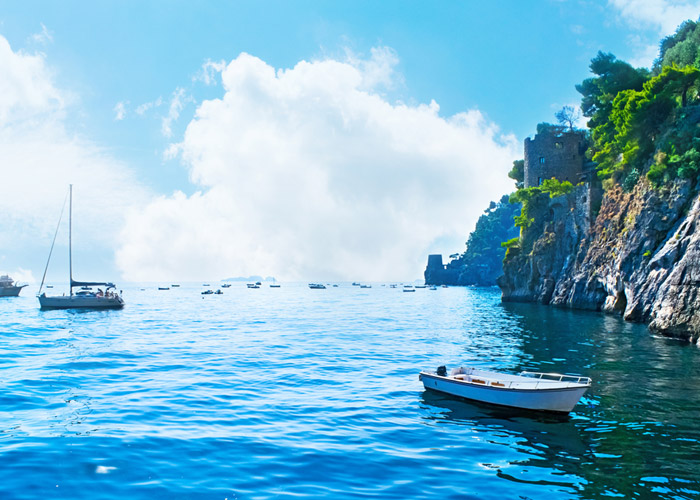 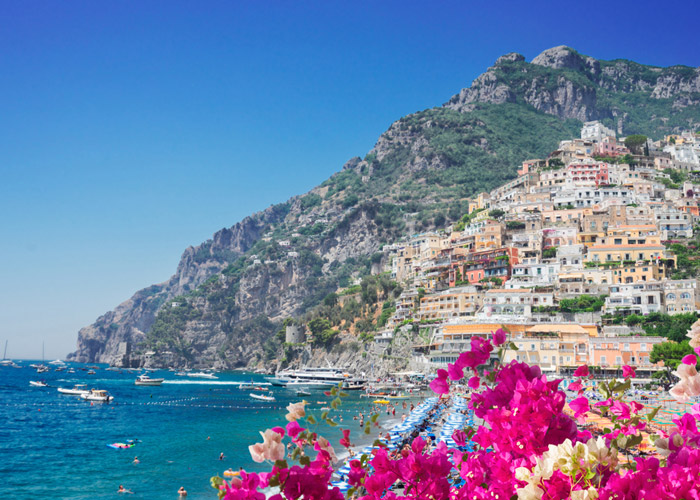 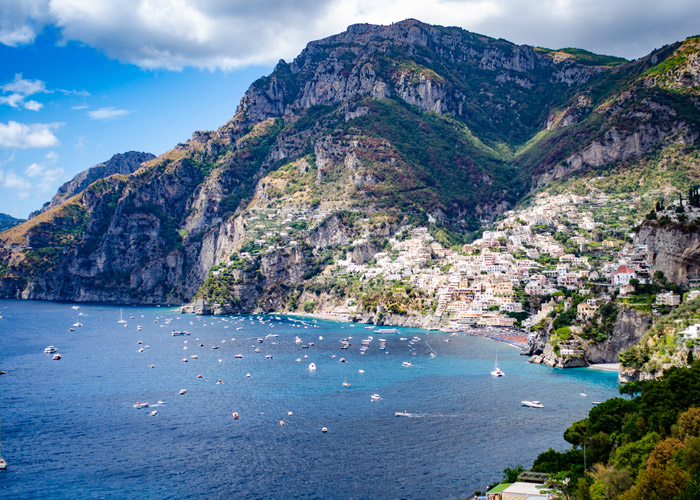 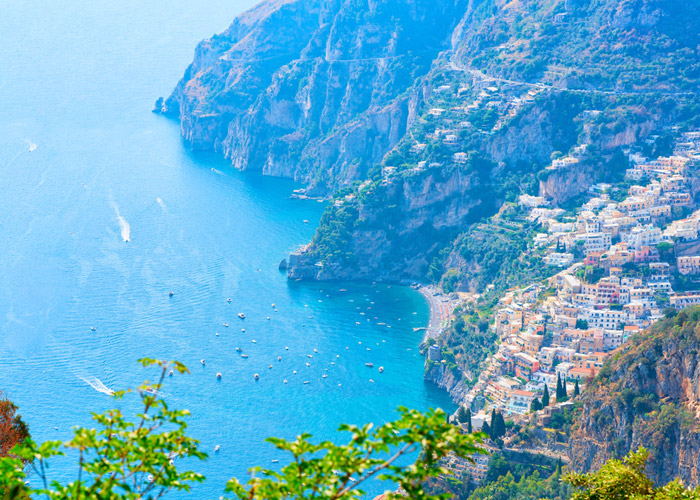 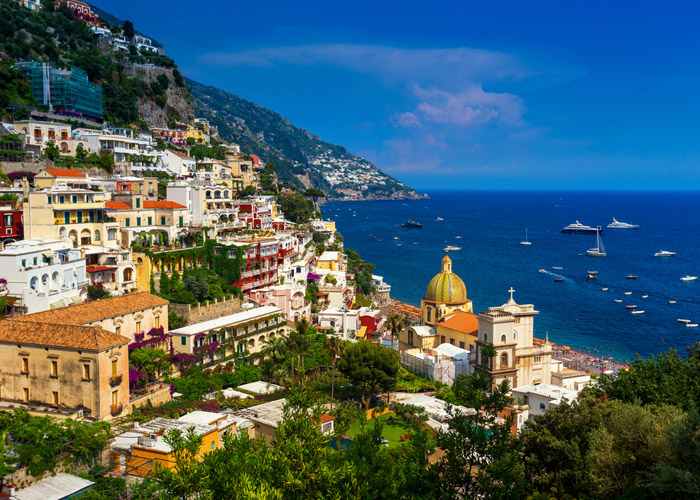 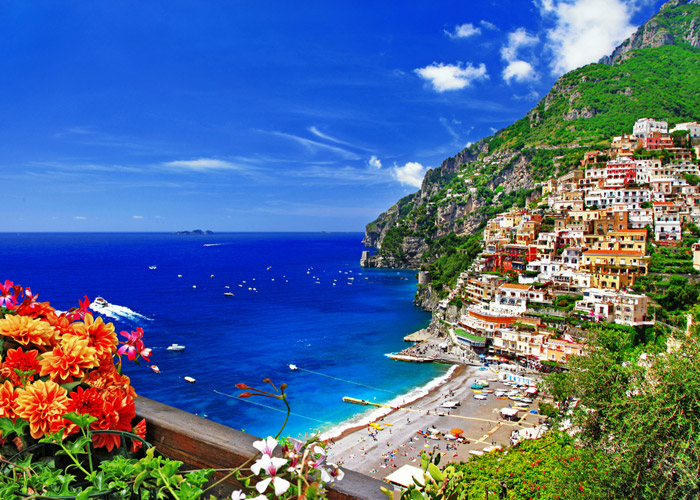 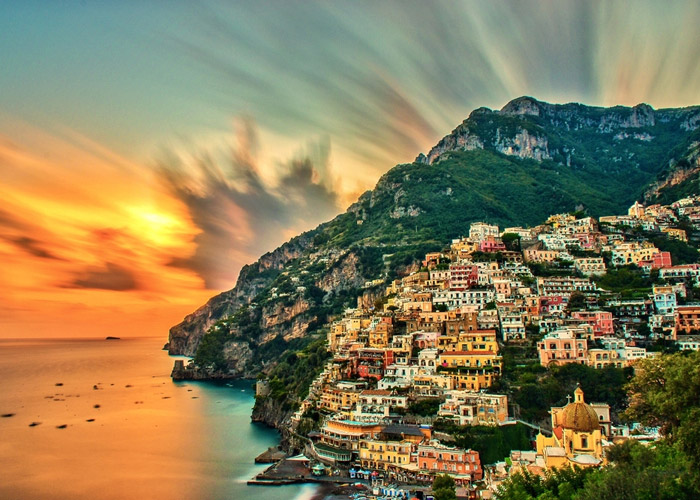 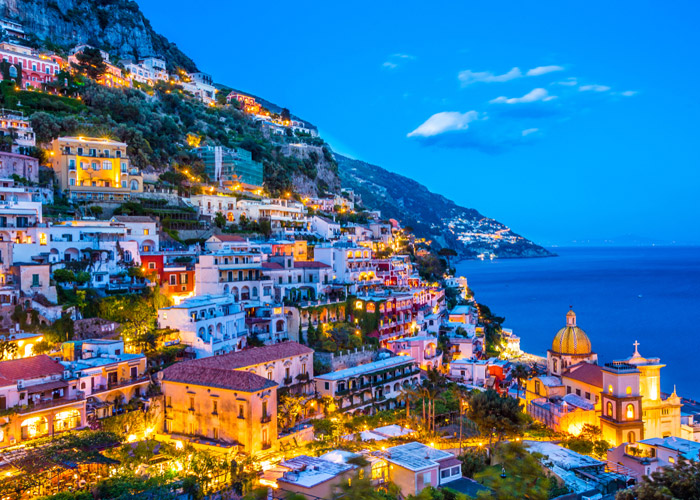